The younger Salk said he rarely capitalizes on his name — but he felt this time it would make a positive difference, because now he was getting the Covid-19 vaccine.

“I publicly stepped forward so I could be vaccinated publicly and have a chance to say something because I hoped that it would make a difference,” Salk told CNN. “I hoped that if I stepped forward from back in the shadows where I usually stay, it might help some people make up their minds. If so, I will be very grateful.”

Salk received the vaccine at UW Medical Center Montlake campus in Seattle, UW Medicine spokeswoman Susan Gregg confirmed to CNN.
More than 24.6 million doses of the Covid-19 vaccine have been administered in the US, according to data published Wednesday by the Centers for Disease Control and Prevention. The state of Washington has administered 534,445 doses of the vaccine, as reported by the CDC. 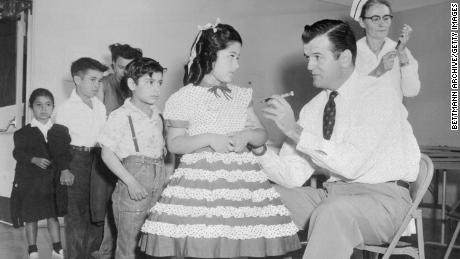 Salk, who has felt fine since getting the vaccine, said he was “delighted” to get his first dose. Part of that is because he has several underlying conditions and is a high-risk patient, he said.

The other part is that he sees it as a feat of modern science. Salk has spent years as a vaccinologist studying the creation of vaccines, as well as how to manufacture and transport them.

“There’s several aspects of it that were very impressive,” Salk said. “The creation of a vaccine that’s effective and safe in less than a year is astounding. It’s an amazing thing. To develop the polio virus vaccine took seven years.”

For him, the decision to get a vaccine was obvious, both for his health and those around him.

“The chances that you will be infected with Covid-19 is so much higher than the risk associated with the vaccine,” he said. “That looks like an easy choice to me. I don’t want to risk my life, or the life of someone I love.”

However, there are people who claim the vaccine is unsafe and others who are vaccine hesitant.

Salk has a message for them.

“The takeaway is that these vaccines are safe, they’re effective and they will help us bring this pandemic under control,” he said. “You should embrace the opportunity to be vaccinated and to be part of the solution.”

Polio and Covid-19 both gripped the US

The polio epidemic gripped headlines in the US as mostly children became stricken with the crippling disease. It captured the nation’s attention and the emotion of it all is something people who lived through it in the first half of the 20th century remember vividly.

The Covid-19 pandemic has some of that same emotion, Salk said, but the trajectory of both diseases is markedly different.

“Polio arose gradually. It was a chronic disease or an endemic disease, and then became epidemic as the susceptible population grew,” Salk said. “The Covid-19 virus, on the other hand, appeared, everybody was susceptible and had no experience with it before. It spread basically like wildfire … around the world very rapidly.”

Beyond the zero-to-60 mph speed of the spread of Covid-19, the fatality rate of the virus is much higher than polio, Salk said. 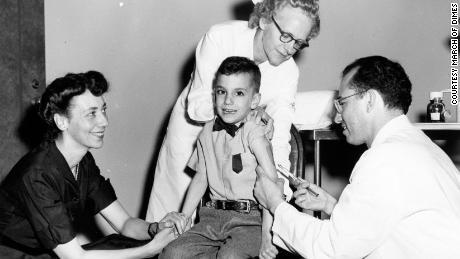 Polio was known for crippling and paralyzing people, killing nearly 2,000 people yearly from 1951 to 1954, according to the CDC. As of Wednesday, Covid-19 has killed at least 428,654 people in the US since last January.

Seeing Covid-19 vaccines distributed has made Salk think of his father and how “pleased and excited he would have been to see this,” he said.

“It impressed on me the importance of the work that my father did, both stopping the epidemic with the vaccine itself, and demonstrating that you could use noninfectious agents to immunize,” Salk said. His father used a killed polio virus to create the vaccine.

Living through the Covid-19 pandemic has had a duality to it for Salk, who is both intrigued and frightened of it.

“I had this kind of push me, pull you reaction,” he said. “I was scared by it, but then I was fascinated to be able to be part of it, to see it and to live through it.”

US response to the pandemic ’embarrasses’ him

Simple acts like washing your hands, wearing a mask and avoiding crowds could have controlled the spread of Covid-19. How the US responded to the pandemic frankly embarrasses Salk, he said.

“It’s really a shame that in this country, supposedly the epitome of advanced countries, the response was, I’m sorry, bungled so badly,” he said.

“We’re now swimming upstream,” he said. “It embarrasses me that the United States is number one in problems with the Covid-19 virus, more cases than anyplace else, it’s spreading faster than anyplace else. It’s embarrassing to me that this country did not respond properly because it was not driven by the science.”

The way to get the virus under control lies in enough people getting the vaccine and Salk hopes that Americans opt to get it.

“Vaccines are safe and effective, and they should be widely used,” he said. “We will get out of this, but it will take individuals doing the proper behavior in order to get rid of it.”