By Joe Pinkstone For Mailonline

Teenagers with bipolar disorder or depression who smoke cannabis are at increased risk of death and self-harm, a shock new study has found.

Mood disorders in adolescence have long been linked with cannabis abuse and this addiction has now been found to have a significant impact on mortality.

Researchers from Ohio State University found teens with a mood disorder and a cannabis habit are 3.28 times more likely to self-harm and 59 per cent more at risk of dying from all causes.

Researchers from Ohio State University in the US found teens with a mood disorder and a cannabis habit are 3.28 times more likely to self-harm and 59 per cent more at risk of dying from all causes (stock)

The risk of death from an unintended overdose is 2.4 higher than in people who avoid the drug, and the likelihood of being a victim of murder is 3.24 times higher, the study finds.

‘Marijuana use and addiction is common among youth and young adults with mood disorders, but the association of this behavior with self-harm, suicide and overall mortality risk is poorly understood in this already vulnerable population,’ says lead author Dr Cynthia Fontanella.

‘These findings should be considered as states contemplate legalizing medical and recreational marijuana, both of which are associated with increased cannabis use disorder.’

The study, published in JAMA Paediatrics, reviewed anonymous cases of more than 200,000 people aged between 10 and 24.

Cannabis use was observed in 21,040 of the teens with mood disorders, one in ten of the study cohort.

Cannabis abuse was more common in older people as well as in black people and males.

Over the seven-year observation period, participants were closely studied as well to determine the prevalence of non-fatal self-harm, all-cause mortality, suicide, overdoses, car crashes, and homicides.

‘We also found that cannabis use disorder was significantly associated with self-harm, including death by unintentional overdose and homicide,’ Professor Fontanella said.

‘Unfortunately, while this observational study calls attention to these associations, it is unable to contribute to our understanding of causality or mechanism.’

The researchers say that not only are youths with mood disorders more likely to use cannabis, but the drug can also worsen symptoms and interfere with treatments.

Decreasing the rates of cannabis use and cannabis use disorder might reduce risk,’ said senior author Professor Mary Fristad.

‘Individual and family-based therapy models, including cognitive behavioral therapy and motivational enhancement therapy have been shown to decrease cannabis use in youth.’

Almost two-thirds of young adults in Britain have taken an illegal drug at least once in their life, new research suggests.

This figure is 22.2 per cent higher than official data from the Crime Survey England and Wales which informs Government policy.

Authors of the new analysis, from Bristol and Public Health England, say the illegality of illicit drug use means gauging true usage is difficult and leads to underestimates.

Amphetamine is the most under-reported drug, with the new study finding almost one in three (32.9 per cent) of 24-year-olds have taken the illegal drug.

This is a four-fold increase on the prevalence seen in the Crime Survey, which records just 8.1 per cent.

Amphetamine was defined as including MDMA but not ecstasy, which itself has been taken by one in nine (11.1 per cent) people in their mid-20s.

Cannabis has been taken by 60.5 per cent of people, up significantly from the lower estimate of 37.3 per cent, the study finds.

Data also reveals powder cocaine has been taken by 30.8 per cent of people, opposed to the 13.9 per cent figure touted by the Crime Survey.

Crack cocaine use is the same for both surveys, at just one per cent of the population, while hallucinogens are up 11.3 per cent to 18.1 per cent of people in the Bristol study.

Opioid use was statistically higher and has been taken by one in 20 people whereas sedatives or tranquilisers have been used by 11.6 per cent of young adults, up 8.1 per cent. 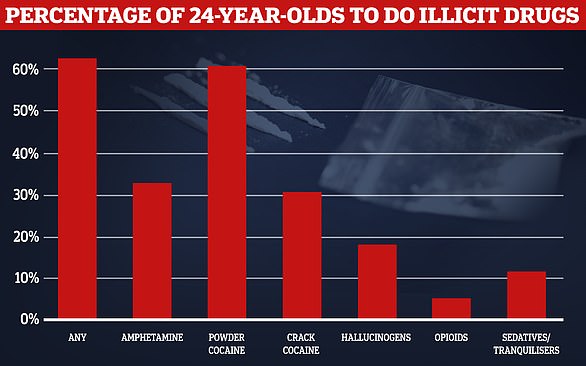 Pictured, the percentage of respondents of the Bristol study looking at how many people have taken illicit drugs at some point in their life