Medical staff and patients at a Jerusalem hospital said it is collapsing under the strain of the third wave coronavirus outbreak in Israel in a report published on Tuesday.

A Channel 12 news crew went into the sealed coronavirus ward of the capital’s Hadassah Hospital Ein Kerem to report on the struggle to care for patients there amid a shortage of beds and equipment.

“The first wave was a shock for us because we weren’t familiar with the disease. After a few shifts we said, ‘Ok, I understand what’s going on.’ But the third wave has hit us hard,” said Claudia Foji, a nurse in the intensive care unit for coronavirus patients. “We’re at war,” she said.

Earlier this month, a coronavirus patient died at Ichilov Hospital after the breathing tube for his ventilator detached and the overworked staff failed to notice for several minutes.

Harel said the Hadassah staff feared something similar could happen to them.

“We’re always afraid, that we won’t be able to see, we won’t notice. It’s a big department. There are 30 beds, and it’s spread out,” she said. “The fear is constant.” Tehila Harel, a nurse in the coronavirus ward of Hadassah medical center in Jerusalem. (Screenshot/Channel 12)

One of the patients in the ward, Yaffa Elimelech, was hospitalized at the beginning of last week and was still in intensive care. She told the news crew, “You can’t breathe. I’m fighting for my life.”

She derided Prime Minister Benjamin Netanyahu’s push to distribute cash handouts to the public to cope with the economic fallout from the pandemic. Netanyahu’s plan has been widely criticized and is not expected to be approved.

“There aren’t any beds here, there’s no equipment, people are being thrown into the hallways,” Elimelech said. “I’m calling on the prime minister — you don’t need to give people NIS 750 when all the hospitals are collapsing. If not for the medical team, I’m dead.”

New virus variants have been blamed for the severity of the third wave outbreak, along with other factors, despite more than two weeks of a national lockdown. After hitting a peak of over 10,000 daily cases last week, the numbers continue to remain stubbornly high.

Israel’s death toll reached 4,512 on Tuesday. More than one-quarter of the country’s total COVID-19 deaths since the start of the pandemic have been registered this month alone.

The Health Ministry said 8,680 cases were diagnosed Monday, with the test positivity rate rising to 9.8 percent, one of the highest figures in more than three months. 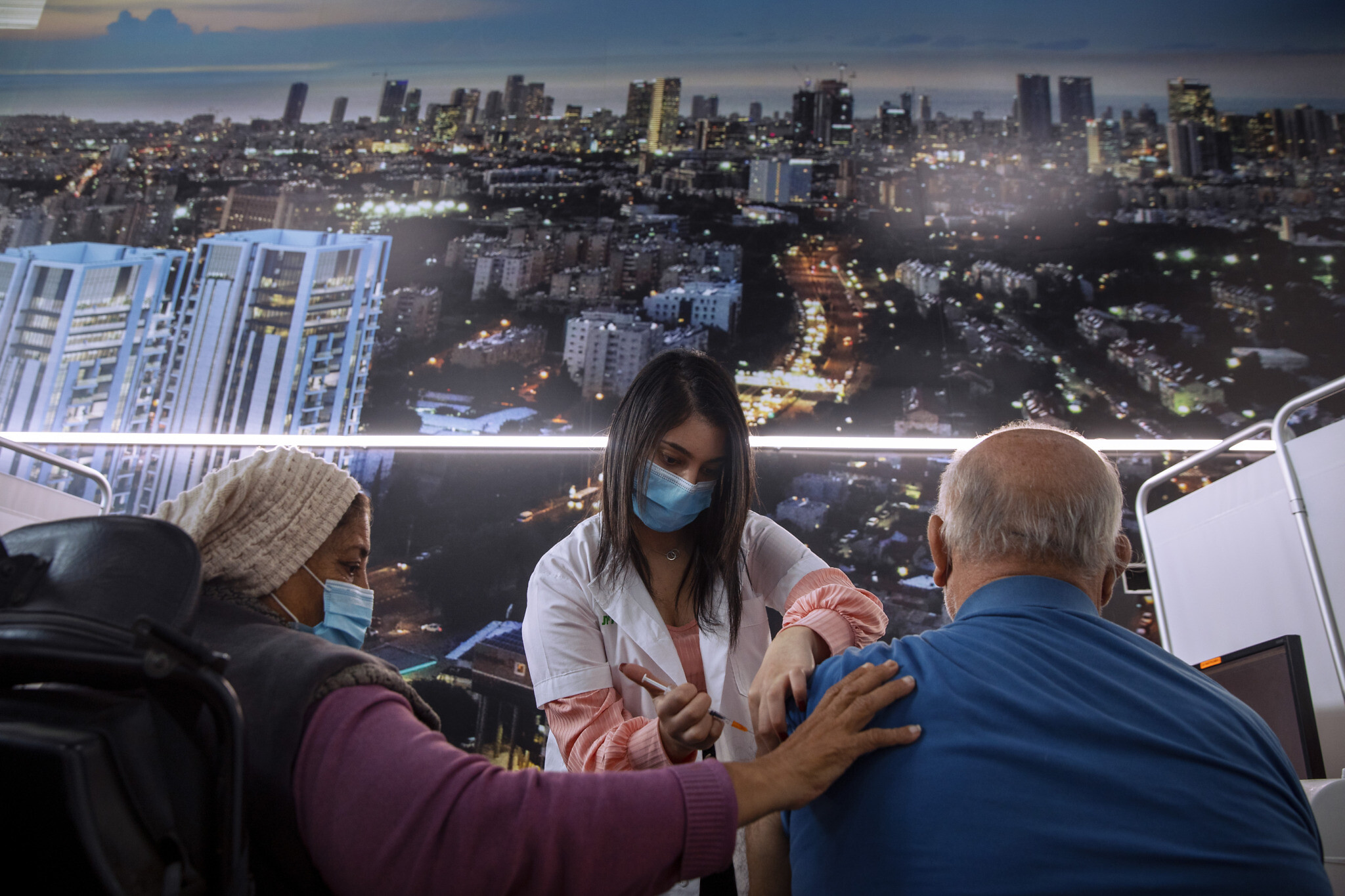 A man receives the second dose of the Pfizer-BioNTech COVID-19 vaccine at a coronavirus vaccination center in Tel Aviv, Jan. 25, 2021. (AP Photo/Oded Balilty)

Total cases since the start of the pandemic have reached 613,578, including 74,392 active cases. Of them, 1,174 are in serious condition. Tuesday saw more than 160 new serious cases, one of the highest daily rates since the pandemic began.

The lockdown rules are currently set to expire on Sunday, but the Health Ministry is expected to push for an extension of the current lockdown restrictions until infections start going down considerably, which is expected to be aided by a high rate of vaccination.

Officials do not see a possibility of reopening schools, the culture industry or businesses under the current conditions.

The outbreak rages as Israel’s largely successful vaccination campaign moves forward. The Health Ministry said Tuesday night that 2,735,008 of Israel’s population of 9.3 million have received at least one dose of the vaccine and 1,325,795 have received both shots. Israel leads the world by far in vaccinations per capita.

On Monday night, Israel shuttered Ben Gurion Airport to nearly all flights until the end of January due to fears over the coronavirus variants entering the country.

The airport closure began at midnight and will remain in effect until Sunday, January 31, when national lockdown measures are currently set to expire unless the government renews them. 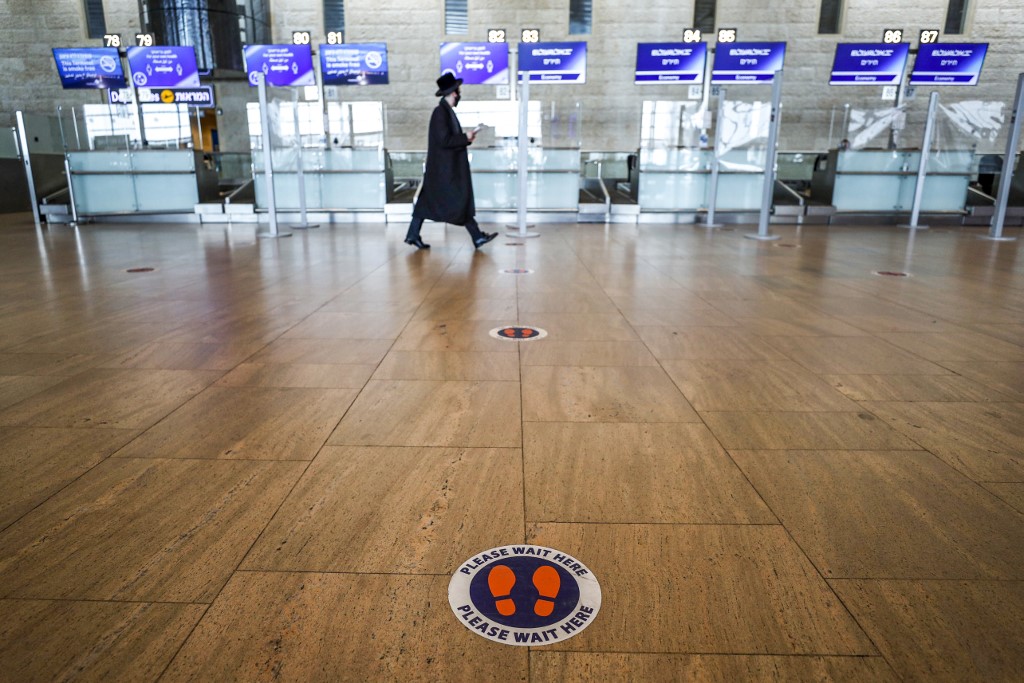 An ultra-Orthodox Jewish man walks past the check-in desk for Israel’s flag carrier El-Al at Ben-Gurion International Airport in Lod, near Tel Aviv, on January 25, 2021, before boarding one of the last flights out of Israel. (Emmanuel Dunand/AFP)

It was the first time since the start of the pandemic that Israel prevented its own citizens from entering the country. Even new immigrants, who have continued to arrive during the pandemic despite limits on non-citizen entry, will have to wait until the shutdown ends to travel to the country.

The British variant of the virus is circulating widely in Israel, accounting for around half of recent cases, according to health officials. At least twenty-seven cases of a South African strain have been found in the country, in addition to four cases of a mutation originating in the US state of California. Officials fear the variants might prove resistant to the vaccines or mutate further to become resistant. The Israeli government’s precautions come as studies indicate the Pfizer and Moderna vaccines offer protection from the variants.

In what appears to be a world first, the Health Ministry on Tuesday issued a directive in favor of vaccinating children under the age of 16 who are at high risk of developing serious symptoms if they contract COVID-19.

The decision still must receive final approval from Dr. Boaz Lev, the health official tasked with delineating priority groups for the coronavirus vaccine. It comes against the backdrop of rising morbidity rates among children in Israel.