An estimated one in five Americans has a sexually transmitted infection (STI), a new report finds.

Data published by the Centers for Disease Control and Prevention (CDC) shows there were nearly 68 million STIs on any given day (prevalent) and 26 million newly acquired (incident) STIs in 2018.

What’s more, almost 50 percent of all incident STIs were diagnosed in those between ages 15 and 24 years old.

The CDC says its new estimates are critical to ‘better understanding the scope of STIs in the U.S.’ and that more measures are needed to

New figures from the CDC estimate that on any given day in the U.S. there were 67.6 million sexually transmitted infections (STIs) in 2018 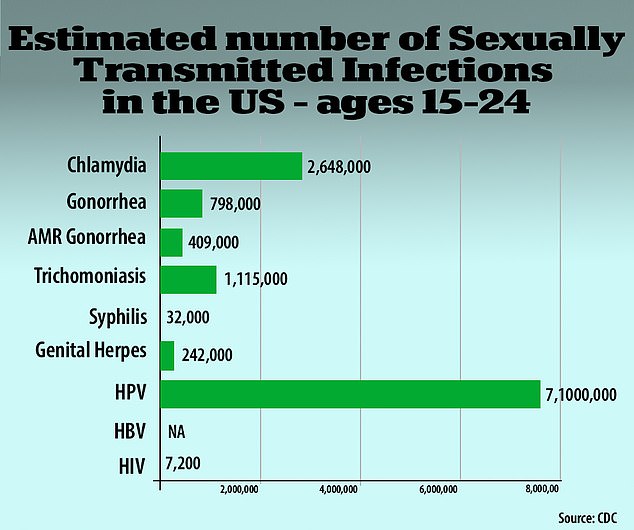 An STI, sometimes called a sexually transmitted disease (STD), is an infection that is passed from one person to another through sexual contact either vaginally, orally or anally.

STIs do not always have symptoms and, if left diagnosed and untreated, can have serious health consequences.

Some infections can increase the risk of HIV or cause chronic pelvic pain, pelvic inflammatory disease and even infertility.

Currently, STIs cause about 2.7 deaths per 100,000 people, primarily due to HIV and HPV (human papillomavirus) infections.

The number of prevalent and incident infections was calculated by multiplying each STI’s per capita estimate by the full resident population estimate.

Results revealed an estimated 67.6 million STIs on any given day.

With a population of approximately 320 million people, the authors say this suggests about 20 percent of Americans had an STI at a given point in 2018.

Researchers also found there were about 26.2 million incident STIs in the U.S. in 2018

The four most common infections were chlamydia, trichomoniasis, genital herpes, and HPV, making up 97.6 percent of all STIs on any given day and 93.1 percent of all newly-acquired STIs.

‘The burden of STIs is staggering,’ said Dr Jonathan Mermin, director of the CDC’s National Center for HIV/AIDS, Viral Hepatitis, STD, and TB Prevention, in a statement.

‘At a time when STIs are at an all-time high, they have fallen out of the national conversation. Yet, STIs are a preventable and treatable national health threat with substantial personal and economic impact. 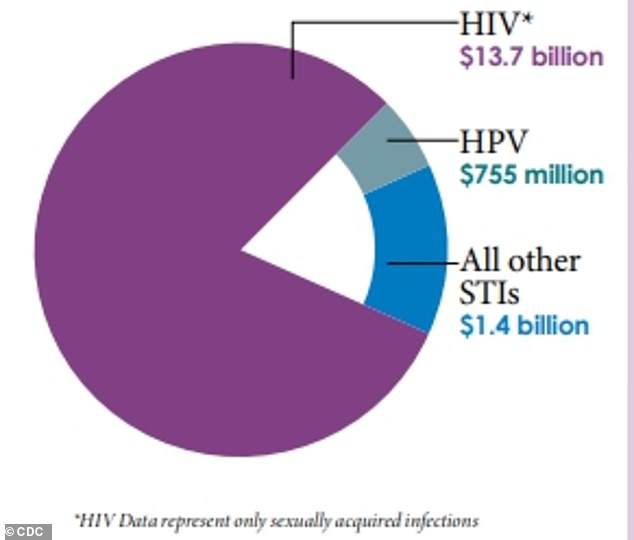 The new infections will likely cost the U.S. healthcare system an estimated $16 billion in lifetime medical costs, with the most related to HIV treatment (above)

Most of the cost, $13.7 billion, is attributed to sexually acquired HIV infections due to the lifetime of antiviral treatment.

The second costliest STI was HPV with about $755 million in treatment for not just the infection but also HPV-related cancers.

Young people ages 15 to 24 account for about 60% of the combined healthcare costs for chlamydia, gonorrhea and syphilis, according to the CDC.

Women make up nearly 75% of the $2.2 billion in non-HIV-related STI medical costs, the agency said.

‘There are significant human and financial costs associated with these infections, and we know from other studies that cuts in STI prevention efforts result in higher costs down the road,’ said Raul Romaguera, acting director for CDC’s Division of STD Prevention., in a statement.

‘Preventing STIs could save billions in medical costs, but more importantly, prevention would improve the health and lives of millions of people.’

Chlamydia is a sexually-transmitted disease that can infect males and females.

The majority of people do not feel symptoms of chlamydia. Doctors recommend getting regular STD tests (urine test or swab) to detect it.

However, some do experience some side effects.

The infection is easily treated with antibiotics.

A very similar STD to chlamydia, gonorrhea is also bacterial, spread through contact.

Women typically do not see symptoms, but men do.

When a woman does experience symptoms, they are very mild and easily mistaken for a bladder infection.

Doctors recommend getting regular STD tests (urine test or swab) to detect it.

Gonorrhea is curable with antibiotics, although health officials fear this may be the first ‘untreatable’ STD as the bacteria builds up resistance to our standard methods of treatment.

The CDC recommends treating the infection with a combination of two antibiotics: azithromycin and ceftriaxone.

The infection has already become immune to penicillin, tetracycline and fluoroquinolones.

Increasingly, gonorrhea is building up a resistance to the individual drugs.

A chronic bacterial disease, syphilis can be contracted by other means but is typically a sexually-transmitted disease.

It comes from the bacteria Treponema pallidum.

Sufferers develop sores, though these can often go ignored.

The infection develops in stages.

In the early stages, patients can receive an injection of Benzathine penicillin G. This will not undo the internal damage but will eliminate the infection.

For those with latent syphilis – and are unsure how long they had it – doctors recommend having three doses of the penicillin injection, seven days apart from each other.