The state has shifted its policy on vaccinating people from across state lines, saying vaccine providers no longer have to offer COVID-19 inoculations to people who don’t live, work or spend “significant time” in North Carolina.

The N.C. Department of Health and Human Services said 2.72 percent of the first 1.1 million first doses administered in North Carolina went to non-residents. That works out to just under 30,000 shots.

Bryan Mims visits a vaccine clinic in Edenton to ask how many people are coming from Virginia and how that impacts NC vaccine supply.

George Allen, a former Virginia governor, traveled an hour-plus from Virginia Beach to Elizabeth City Friday to get his shot, then Tweeted about the trip, posting pictures on social media.

“Like many VA Beach neighbors we find NC much easier to get COVID vaccination,” he wrote. “My family is happy, relieved. Will now go to Popeye’s.” 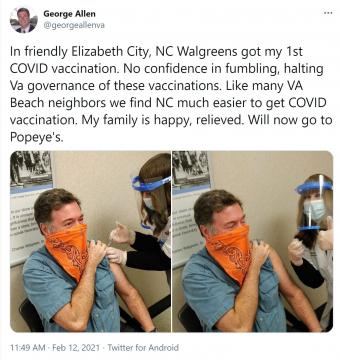 Albemarle Regional Health Services Director R. Battle Betts, whose organization oversees public health in and around Elizabeth City, said ARHS initially had about 2,000 people show up from out of state to get their shots, in part because North Carolina and Virginia had different eligibility requirements.

“This has since been rectified and should alleviate the issue moving forward,” Betts said in an email. “On the demographics front, I don’t believe it was a wealth issue, as we had a wide variety of folks present for service from all parts of VA.”

For weeks, North Carolina officials have said they couldn’t turn away out-of-state vaccine seekers because the vaccines are paid for and provided to each state by the federal government. But the CDC’s guidance on this shifted last week, and state officials confirmed Monday that North Carolina will shift with them, though it seems local health departments, hospitals and pharmacies offering shots get the final say.

“It is permissible to not offer vaccine to temporary travelers who do not reside, work, or spend significant time in the North Carolina,” DHHS spokeswoman SarahLewis Peel said in an email. “This could include persons briefly passing or traveling through North Carolina or coming to North Carolina for the main purpose of receiving a COVID-19 vaccine and then returning to another state.”

It wasn’t immediately clear whether other neighboring states will follow suit. Health departments in South Carolina and Tennessee told WRAL News Friday that they don’t have residency restrictions, and Tennessee put its out-of-state-shots percentage in the same neighborhood as North Carolina’s: About 3 percent.

Health departments for the other two states that border North Carolina – Virginia and Georgia – didn’t immediately respond to questions, but Georgia’s health commissioner has said publicly that the state doesn’t try to prevent the practice, though she considers bordercrossers “irresponsible and selfish.”

“A state may decide that protecting the public health of its residents requires limiting vaccinations to state residents and not temporary travelers who do not reside in the state,” a liaison with the CDC’s coronavirus team told DHHS, in an email later provided to WRAL News. “This would be allowable under CDC’s grant terms as long as the policy is intended to promote public health aims, such as reaching priority populations and promoting equity.”

Asked about the previous policy, DHHS provided an email chain from January. Initially, a regional liaison with the CDC said it was up to the states. But two days later, on January 8, that was clarified: “As a federal vaccine bought with federal funding, jurisdictions should not put restrictions on administering to non-residents, as long as those patients meet the current eligibility criteria.”

Health experts say it makes sense to offer vaccinations across county and state lines in some cases. Even in discussing the latest policy shift, DHHS said “all North Carolinians will benefit from as many eligible people as possible receiving the vaccine as quickly as they are able.” The department also said people who work in North Carolina or receive on-going health care here should continue to be vaccinated here if they like.

Betts said he he didn’t have a problem with Virginians from border counties coming to North Carolina for their shot.

“You could certainly make a viable argument that border counties could potentially serve each other without borders, as there tends to be quite a blend in daily living anyway,” he said. “The true issue was folks attempting to come from Richmond and northward. I believe that is beyond anyone’s reasonable expectation.”