When the ambulance driver pulled to the top of the hillside, Simbota, too weak to move, was left on a stretcher at the main entrance of the red brick building. The minutes wore on, his bare chest expanding, and then cratering as he took struggled breaths through a blue surgical mask. His stretcher parked in quiet corner, away from foot traffic and staff members who gathered near the reception desk.

After more than an hour in the searing midday heat, Simbota’s family pulled up to the entrance in a small hatchback. Four of them struggled to pull him off the stretcher and squeeze him into the back. His wife cradled his head, covering his feverish body with a green and black blanket.

A dramatic second wave of Covid-19 in Malawi, fueled by the new variant first discovered in neighboring South Africa, has inundated much of its health infrastructure, leaving many families to make agonizing choices, and exposed the danger of deep inequalities in Covid-19 vaccine distribution.

“I used to do regular rounds at district hospitals. It was a way for us to ensure the quality of care across the country,” says Dr. Tamara Phiri, a specialist treating Covid-19 patients at Queen Elizabeth Central Hospital in Blantyre, the largest hospital in Southern Malawi.

But like many of Phiri’s other responsibilities, her district visits ended when Covid-19 struck in earnest in Blantyre and her home hospital’s Covid-19 admissions hovered near capacity. 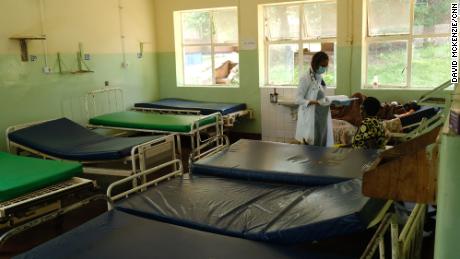 Malawi — and Queen’s hospital — seemed to be spared the worst during the first wave of Covid-19 — a fact many, including Phiri attributed to its young and mostly rural population. But not during this wave.

According to official government data, the record for confirmed single day Covid-19 cases was nearly seven times higher at the very peak of this second wave compared to the first.

In the first three weeks of January, the number of severe Covid-19 patients at Queen’s hospital shot up from 12 to 107 cases, says Doctors Without Borders (MSF.)

Every day, Phiri passes a white tent pitched in the hospital courtyard on her way to the Covid-19 ward — it is where they disinfect the bodies of the patients she couldn’t save. “That’s one of the most traumatic things. We see people die all the time, but not like this. Not at this rate, not this many people who were well just a week or two ago. It can get quite brutal,” she says. 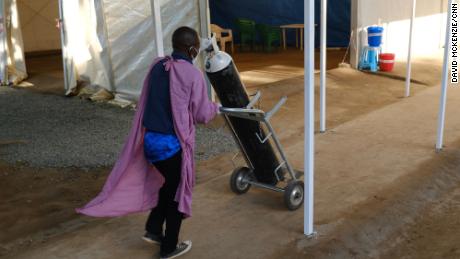 Healthcare workers have been hit particularly hard. Before the pandemic, the impoverished country in Southern Africa could only just manage its healthcare. Now doctors and nurses are calling in sick and several have died from the virus.

All told, of the eight specialists working in her hospital’s converted Covid-19 wards, only three are left to tend to more than 80 Covid-19 positive patients.

But specialists like Phiri and frontline health workers in Malawi and across the rest of the continent will likely only get access to vaccines long after becoming available to young, healthy people in the US and Europe.

Malawi’s national vaccination plan is dependent on COVAX, the World Health Organization-backed facility organized to help poor countries access Covid-19 vaccines. Its government promised last week that the first consignment of the AstraZeneca vaccine will arrive by the end of February. But healthcare workers are preparing for a much longer wait, skeptical they will be delivered anywhere near that schedule because of regulatory red tape, and worried by an announcement Sunday by South African scientists that show the vaccine provides “minimal protection” against the variant discovered there.

“It’s brutal, but it is the reality,” says Phiri. She says it reminds her of the fight against HIV/AIDS, where life-saving anti-retroviral drugs were available in the United States to combat the virus years before they became available in countries like Malawi — one of the worst affected countries in that pandemic. 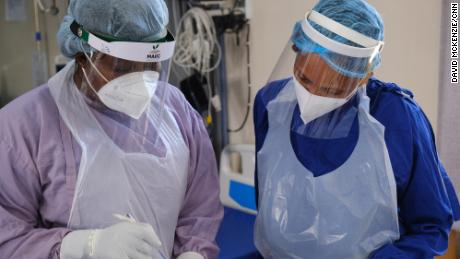 In the fight against the coronavirus, rich countries with only 16 percent of the world’s population have already reserved around 60 percent of the available vaccine supply, according to ongoing monitoring by Duke University researchers.

On current schedules, it could take years to get enough vaccines to Malawi to inoculate the general population and stop infection waves. MSF says the immediate goal should be to get 40,000 doses, enough to vaccinate all of the country’s overburdened frontline healthcare workers

“The issue with vaccines right now is more a time issue than a quantity issue,” says Marion Pechayre, the head of MSF in Malawi, whose team is using every available bit of space outside of Queen’s hospital to build triage tents and consulting areas for possible Covid-19 patients for this and future waves of the virus.

The medical charity is trying to buy directly from the pharmaceutical companies to donate to frontline medical workers. Otherwise, they say, the health system could collapse. So far, pharma companies have only negotiated directly with governments.

“If we vaccinate and prioritize frontline medical personnel quickly enough, the health care system won’t be as badly affected as if we don’t. It seems unfair and unreasonable not to,” says Pechayre.

Too afraid to seek help

The coronavirus has also impacted health in Malawi indirectly, by scaring people away from seeking treatment for other issues. Many worry they won’t receive care from an overburdened staff, or worse that they will catch Covid-19 during their visit.

After finishing her Covid-19 rounds for the day, Phiri heads to one of the hospital’s general wards, to prep a final year student for his last internal medicine exam. He carefully exams the only patient in a row of empty cots, reporting back to Phiri.

The general ward has more than sixty beds and is usually full of malaria cases and patients with chronic problems, but it is now largely empty. People are just too afraid to come to the hospital, Phiri says. “It is a disaster waiting to happen.”

Many will die at home

Away from Queens hospital and into the periphery of Malawi’s health care, smaller district hospitals and clinics face all of the same pressures, only magnified.

At the immaculate Thyolo district hospital, to the South of Blantyre, Dr. Arnold Jumbe shows his small Covid-19 isolation ward where several patients — including a clinician –are recovering from the virus.

Vaccinating doctors will shore up the hospital’s minimal resources and dispel some of the myths about it swirling on social media and in the local press, Jumbe says. 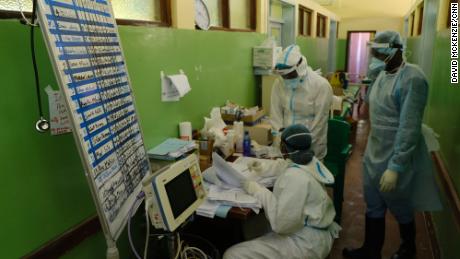 Vaccinating healthcare workers would be the first step in shoring up a failing health system — and crucially, in restoring Malawians’ confidence in their hospitals. But until then, families don’t know where to turn.

After Simbota’s family left Mulanje district hospital, they rushed to find him care that they felt they could trust.

The family couldn’t afford the mission hospital in town. The next village’s district clinic doesn’t treat Covid-19 patients — so they referred the family back to Mulanje.

On Sunday morning, the approach to Simbota’s modest brick house was blocked with branches and leaves strewn across the red dirt road. It was a symbol, prepared by his neighbors.

A man passed by on a bicycle. “Andrew Simbota died last night,” he said.