Variants in a gene called GIGYF1 can increase the risk of developing Type 2 diabetes six-fold, a new study reveals.

Variants in the gene – which is thought to control insulin and cell signalling for growth – are found in only one out of 3,000 people, the study authors say.

However, they have a larger impact on the risk of developing type 2 diabetes than any previously identified genetic effect.

Type 2 diabetes is a common condition that causes the level of sugar in the blood to become too high, and is often linked with being overweight or inactive.

It’s thought to be driven in part by inherited genetic factors, but many of these genes are yet unknown, the study authors add.

Diabetes is a lifelong condition that causes a person’s blood sugar level to become too high.

There are two main types of diabetes:

– Type 1, where the body’s immune system attacks and destroys the cells that produce insulin.

– Type 2, where the body does not produce enough insulin, or the body’s cells do not react to insulin.

In the UK, around 90% of all adults with diabetes have Type 2.

The research has been carried out by a team at the University of Cambridge’s MRC Epidemiology Unit.

As it stands, they aren’t sure why variants in GIGYF1 lead to such a substantial increase in the risk of developing type 2 diabetes, but this will be the subject of future research.

‘But often only increasing our risk by a tiny amount. This particular variant, while rare, has a big impact on an individual’s risk.

‘Both men and women can carry these variants.’

Type 2 diabetes is where the body does not produce enough insulin, or the body’s cells do not react to insulin. It’s much more common than type 1, where the body’s immune system attacks and destroys the cells that produce insulin.

However, scientists can find out more about the genetic factors that may cause type 2 by looking for genetic variations across the genome – the complete set of genetic information in an organism, stored in long molecules of DNA called chromosomes.

Recent technical advances have allowed more comprehensive genetic measurement by reading the complete DNA sequences of more than 20,000 humans genes that code for proteins, which are essential for our bodies to function.

‘Reading an individual’s DNA is a powerful way of identifying genetic variants that increase our risk of developing certain diseases,’ said Dr Perry.

For the study, researchers looked at data from more than 80,000 men in the UK Biobank study to identify genetic variants associated with the loss of the Y chromosome.

Y chromosome loss is a known biomarker of biological ageing that occurs in a small proportion of circulating white blood cells in men and indicates a weakening in the body’s cellular repair systems.

This biomarker has been previously linked to age-related diseases such as cancer, as well as type 2 diabetes.

The team identified rare variants in the gene GIGYF1 that substantially increase susceptibility to loss of the Y chromosome.

Variants in this gene can also be carried by women (who don’t have the Y chromosome), and were additionally found to increase risk of developing type 2 diabetes six-fold in both sexes.

For the one in 3,000 people with a GIGYF1 genetic variant, their risk of developing type 2 diabetes is around 30 per cent, compared to about 5 per cent in the wider population. 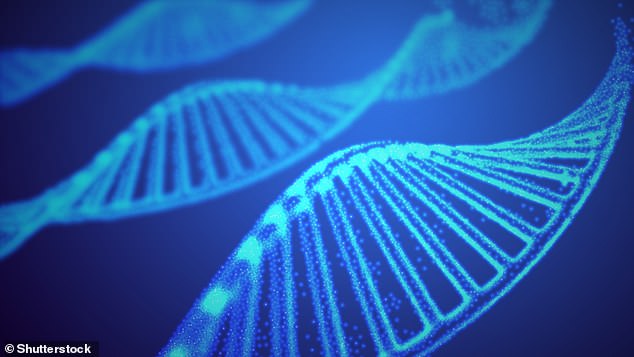 An organism’s genome is written in a chemical code called DNA. DNA, or deoxyribonucleic acid, is a complex chemical in almost all organisms that carries genetic information. Pictured, artistic 3D rendering of a DNA double helix

Common genetic variants associated with type 2 diabetes result in much more ‘modest’ increases in risk – typically much lower than two-fold.

The study also found that people who carried the GIGYF1 genetic variants had other signs of more widespread ageing, including weaker muscle strength and more body fat.

‘We are confident that this approach will bring a rich new era of informative genetic discoveries that will help us better understand common diseases such as type 2 diabetes.

‘By doing this, we can potentially offer better ways to treat – or even to prevent – the condition.’

Diabetes affects more than 460 million adults across the world, and is the seventh leading cause of disability.

It accounts for more than $320 billion (£250 million) in health care costs in the US alone.

More than four million people in the UK have diabetes, with 90 per cent of these cases classified as type 2. The figure is set to rise to 5 million by 2025 because of the obesity epidemic.

Full results from the Cambridge study have been published today in the journal Nature Communications.

Diabetes is a lifelong condition that causes a person’s blood sugar level to become too high.

There are two main types of diabetes:

– Type 1, where the body’s immune system attacks and destroys the cells that produce insulin.

– Type 2, where the body does not produce enough insulin, or the body’s cells do not react to insulin.

In the UK, around 90% of all adults with diabetes have Type 2.

Reducing the risk of Type 2 diabetes can be achieved through healthy eating, regular exercise and achieving a healthy body weight.