Boiled, fried, scrambled or in an omelette, whole eggs pose a threat to health and eating more of them increases your risk of death, a study claims.

Researchers found eating just half a whole egg — which includes the yolk and the white — increases the likelihood of dying by seven per cent.

Risk of death increases by a further seven per cent for every half an egg on top of this, so a person eating one egg a day has at 14 per cent greater chance of death than someone who avoids the food.

Chinese researchers who led the study believe high fat and cholesterol levels in eggs are to blame.

They warned that people should use only the whites or switch to healthier egg substitutes, which lower the risk of dying.

Substituting an equivalent amount of nuts or legumes for half a whole egg reduced death rates by up to a third. Poultry, dish or dairy products had a similar effect. 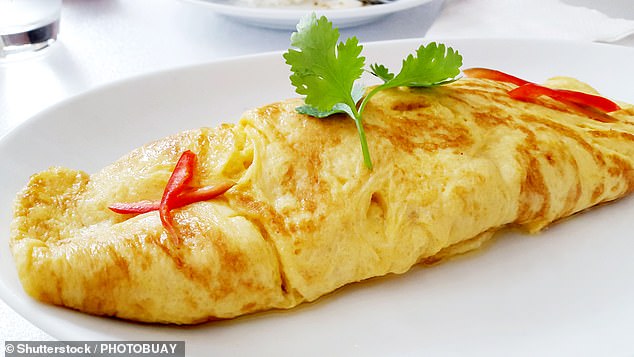 Boiled, fried, scrambled or in an omelette, whole eggs pose a threat to health and eating more of them increases your risk of death, a study warns (stock)

WHAT IS HIGH CHOLESTEROL?

Cholesterol is a fatty substance that is vital for the normal functioning of the body.

But too much can cause it to build up in the arteries, restricting blood flow to the heart, brain and rest of the body.

This raises the risk of angina, heart attacks, stroke and blood clots.

Cholesterol is made in the liver and is carried in the blood by proteins.

The first – high-density lipoprotein (HDL) – carries cholesterol from cells to the liver where it is broken down or passed as waste. This is ‘good cholesterol’.

High cholesterol can be genetic but it is also linked to a diet rich in saturated fat, as well as smoking, diabetes, high blood pressure and a family history of stroke or heart disease.

Blood cholesterol is measured in units called millimoles per litre of blood, often shortened to mmol/L.

Cholesterol can be lowered by eating a healthy, low-fat diet; not smoking; and exercising regularly.

If these do not help, cholesterol-lowering medication like statins may be prescribed.

Researchers gave a questionnaire to more than half a million Americans  between 1995 and 1996 and followed them for 16 years.

Data from this study, published in PLOS ONE, shows 129,328 people who filled out the original form died.

Co-author Professor Yu Zhang, of Zhejiang University said: ‘In this study, intakes of eggs and cholesterol were associated with higher all cause, cardiovascular disease and cancer mortality.’

The link between eggs and health has been debated for years. They have long been thought of as a healthy dietary addition.

They are included in many country’s national dietary guidelines. But the food, specifically the yolk, is high in cholesterol – which is known to be harmful.

Researchers asked the participants about how much cholesterol they had as part of their diet on top of eggs and found an additional 300 milligrams of cholesterol a day were 19 per cent more likely to die over the next 16 years.

Deaths specifically from cancer and cardiovascular disease rose by 24 and 16 per cent, respectively.

There is no cholesterol in the white of a medium-large chicken egg, and around 186 mg in the yolk.

Cholesterol can build up in the arteries leading to a blood clot which can cut off blood supply, potentially triggering strokes or heart disease.

The NHS says eggs are a good choice as part of a healthy, balanced diet. As well as being a source of protein, they also contain vitamins and minerals.

It says there is no recommended limit on how many eggs people should eat, but advises cooking them without adding salt or fat. Frying can increase their fat content by around 50 per cent. 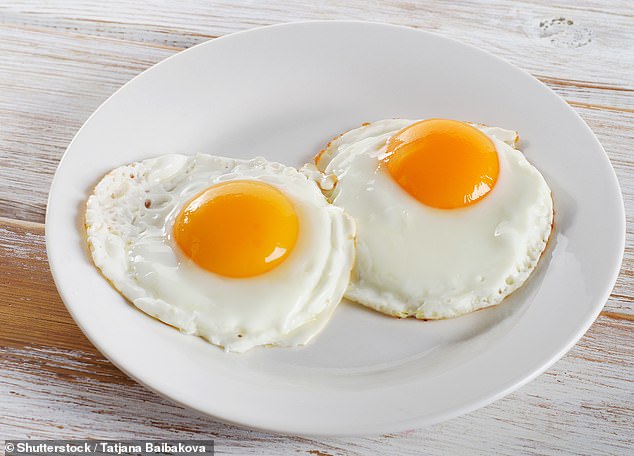 Researchers found eating just half a whole egg — which includes the yolk and the white — are seven per cent more likely to die. Likelihood of death increases by a further seven per cent for every half an egg on top of this, so a person eating one egg a day is at 14 per cent higher risk of death than someone who avoids the food

‘This research makes it possible to look at relationships between what people ate in the past and whether that could be related to disease or death in the future,’ says Dr Ada Garcia, a senior lecturer in Public Health Nutrition at the University of Glasgow who was not involved in the research, saus.

‘The authors took a very careful approach to analysed the data and consider many aspects that could distort the findings.

‘The study concluded that retired people who ate more whole eggs seven per cent higher risk to develop cardiovascular disease. The highest consumption of eggs was about half a small egg in 2000 Kcal per day.’

However, she criticises the methodology and conclusions of the Chinese team, saying: ‘Being overweight or obese, smoking or consuming too much alcohol and not being physically active are much more important factors to consider for prevention of chronic diseases and related death.

‘The conclusions of this study are overblown. Blaming eggs alone for an increased risk of cardiovascular disease is a simplistic and reductionist approach to the concept of diet and disease prevention.’