Updated at 5:15 p.m.: Revised to include Denton County data.

Dallas County reported 1,858 new coronavirus cases Tuesday, as well as 22 more deaths from COVID-19. In Tarrant County, an infant was among the 29 victims reported Tuesday.

The latest Dallas County victims included six Dallas residents, all of whom had underlying health problems: two women in their 50s, a man and woman in their 60s, a man in his 80s, and a woman in her 80s who lived in a long-term care facility.

Four Lancaster residents also died: a woman in her 60s and two men and a woman in their 70s. All had underlying health problems.

Three Duncanville residents, all of whom had underlying health problems, were among the dead: a woman in her 60s, a man in his 70s and a man in his 80s. 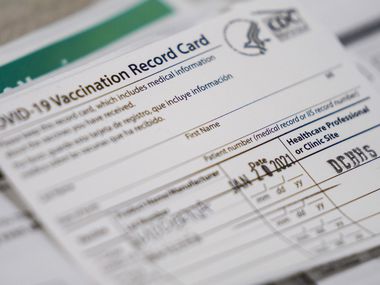 Health officials use hospitalizations, intensive-care admissions and emergency room visits as key metrics to track the real-time impact of COVID-19 in the county. In the 24-hour period that ended Monday, 1,133 COVID-19 patients were in acute care in hospitals in the county. During the same period, 453 ER visits were for symptoms of the disease, making up about 21% of all ER visits in the county.

The county said in a news release that while hospitalization numbers were slightly down, forecasting from UT Southwestern Medical Center indicated the county could reach 1,600 hospitalizations by Feb. 5.

“ICU capacity remains heavily strained and hospitals are still operating under surge planning,” the county said in a statement.

According to the state’s data, 117,520 people in Dallas County have received at least one dose of a coronavirus vaccine, while 22,290 are fully vaccinated.

According to the state’s data, 1,571,093 people in Texas have received at least one dose of a coronavirus vaccine, while 297,503 are fully vaccinated.

The county on Tuesday reported its youngest victim so far: a Fort Worth boy who was under 10. County officials didn’t provide further details about the boy, including his age and whether he had any health problems, but a spokeswoman for Cook Children’s Medical Center said the child was under 1 year old.

Twenty-six of the victims reported Tuesday had underlying health problems. One did not, and it was unknown whether the remaining two did.

According to the county, 1,295 people were hospitalized with the virus as of Monday.

According to the state’s data, 90,645 people in Tarrant County have received at least one dose of a coronavirus vaccine, while 9,451 are fully vaccinated.

No details about the latest victims were available.

According to the county, 493 people are hospitalized with the virus.

According to the state’s data, 43,645 people in Collin County have received at least one dose of a coronavirus vaccine, while 9,330 are fully vaccinated.

Eight of the victims lived in Denton: two men in their 50s and four men and two women older than 80. Three of the men older than 80 and one of the women were residents of Anthology of Denton, and the other woman was a resident of Brinker Denton Senior Care Center.

According to the county, 180 people are hospitalized with the virus.

State data show that 24,229 people in Denton County have received at least one dose of a coronavirus vaccine and that 5,039 are fully vaccinated.

The Texas Department of State Health Services has taken over reporting for these other North Texas counties. In some counties, new data may not be reported every day.

The latest numbers are: