“The Southeast Asia region reported over 2.7 million new cases and over 25,000 new deaths, a 19% and a 48% increase respectively compared to the previous week,” the WHO said on Wednesday. “India is currently driving the vast majority of this upward trend.”

The rapid resurgence of the virus has placed enormous pressure on the health systems and medical supplies of these countries. Some have called for international assistance amid the deepening crisis.

On Wednesday, the International Federation of Red Cross and Red Crescent Societies (IFRC) warned more must be done to stop the tragedy unfolding across Asia.

“We need to act now and we need to act fast to have any hope of containing this human catastrophe,” Alexander Matheou, the IFRC’s Asia-Pacific regional director, said in a statement. “This virus has no respect for borders and these variants are running rampant across Asia.”

Sri Lanka has experienced a steep spike in coronavirus cases since mid-April, with infections quickly surpassing the peak of its previous wave in February.

According to the country’s Health Minister Pavithra Wanniarachchi, the uptick in infections was due to the large gatherings for Sri Lanka’s New Year on April 13 and 14, during which people crowded the streets to celebrate and shop.

Before the event, authorities seemed confident Covid-19 was under control, and encouraged the public to celebrate while adhering to health guidelines.

In a New Year message on April 12, President Gotabaya Rajapaksa said while the pandemic prevented Sri Lanka from celebrating the festival last year, “this year all of us together have made it possible to enjoy the New Year festivities.” 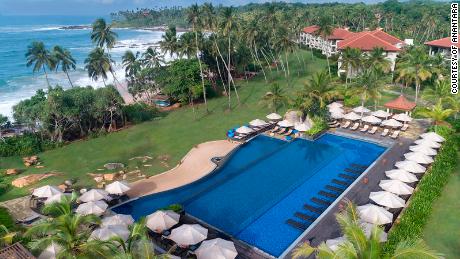 “It is my hope and expectation that all citizens without any discrimination will join the Sinhala and Tamil New Year celebrations with fresh hopes, determination, and righteous thoughts,” he wrote.

But infections started to spike soon afterward. On April 27, the country reported 1,111 new cases, the first time daily infections had surged past 1,000 since the pandemic began. Authorities responded by shutting schools, banning private functions and imposing lockdowns in more than 100 areas across the country of 21 million people.

But the restrictions failed to flatten the rising caseload. On Wednesday, Sri Lanka expanded its lockdowns to four more districts. As of now, lockdowns have been imposed in 13 of the country’s 25 administrative regions. 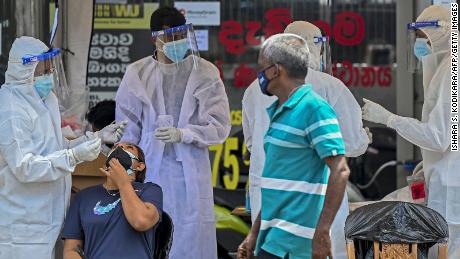 Despite its close proximity to India, the Indian coronavirus variant had not been detected in Sri Lanka as of last week, according to Dr. Chandima Jeewandara at the University of Sri Jayawardenapura, who leads a team that conducts genetic sequencing of Covid-19 in the country.

Instead, the rapid increase in cases is blamed on the highly contagious variant B.1.1.7, which was first detected in the United Kingdom and is circulating in Sri Lanka, Jeewandara said.

Last week, President Rajapaksa said the only answer the spiraling outbreak is vaccination. But Sri Lanka is facing a shortage of 600,000 doses of the AstraZeneca vaccine it ordered from the Serum Institute of India to complete the second round of its inoculation program.

On Thursday, Sri Lanka became the latest neighboring country to seal its borders with India, following Bangladesh and Nepal. Flight passengers from India were banned from entering, and Sri Lanka’s navy said it had stepped up patrols to keep away Indian trawlers.

The Maldives, another neighbor of India, on Tuesday reported a daily record of 601 new Covid-19 cases, according to the country’s Health Protection Agency.

With its economy depending heavily on tourism, the Indian Ocean archipelago reopened its borders to international travelers last July after three months of lockdown, becoming the first country to welcome foreign tourists in the middle of the pandemic.

As India’s other neighbors now rush to seal borders and impose travel bans, Maldives resorts are still welcoming Bollywood stars and other well-off Indians seeking to escape the crisis at home.
This year, India has become the largest source of tourists for the Maldives. From January to March, almost 70,000 Indians visited the atoll nation, accounting for 23% of the market share and doubling the number of Indian holidaymakers in the whole of 2020, according to the Ministry of Tourism. 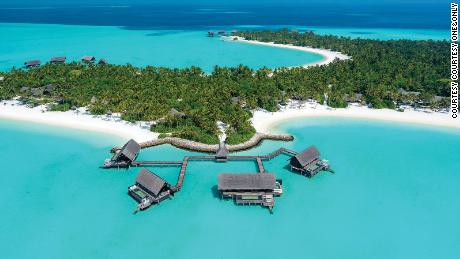 Last month, Maldivian officials announced plans to offer vaccinations to tourists on arrival, in a bid to lure more visitors. But such plans will only be rolled out after Maldives residents are fully vaccinated, officials said. So far, the country of 530,000 people has administered more than 400,000 doses of Covid-19 vaccine, or 76 doses per 100 people. Only 21% of its population is fully vaccinated.

For now, the country is focusing on containing the virus among its own population — especially in the densely populated Greater Malé Region.

On Monday, the country’s Health Emergency Operation Centre warned the number of Covid-19 hospitalizations had tripled over the previous few days, and a new variant of the coronavirus may have entered in the Maldives.

A 9 p.m. to 4 a.m. curfew was introduced for the Greater Malé Region from Thursday, during which individuals may only go out for essential purposes and delivery services with a permit from the police.

In Nepal, the situation is increasingly resembling the crisis in India, with skyrocketing infections, overwhelmed hospitals and pleas for help from other nations.

The country is now reporting about 20 daily Covid-19 cases per 100,000 people — about the same rate that India was reporting two weeks ago.

“What is happening in India right now is a horrifying preview of Nepal’s future if we cannot contain this latest Covid surge that is claiming more lives by the minute,” Nepal’s Red Cross chairperson, Dr. Netra Prasad Timsina, said in a statement.

Nepal has fewer doctors per capita than India, and a lower vaccination rate than its southern neighbor. 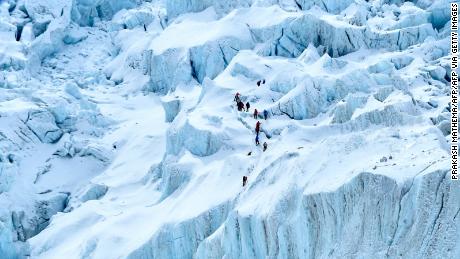 Mass public events, including festivals, political gatherings and weddings, have allowed infections to spread, along with general public complacency and slow government action.

“The situations are worsening day by day and it may go out of control in future,” Dr. Samir Adhikari, a spokesperson for Nepal’s Ministry of Health and Population, said Monday.

Some have blamed Nepal’s rapid surge in infections on the spillover effect from India. The two countries share a long, porous border. In recent weeks, some Indians have fled their country’s second wave, hoping to access health care in Nepal or escape to a third country, Adhikari said.

Although Nepal has tightened borders and imposed lockdowns in its worst-hit regions — including Kathmandu — some fear that won’t be enough to contain the virus as it spreads through the capital, and even as far as Mount Everest’s Base Camp.

Despite being the first country to report a Covid-19 case outside of China in January last year, Thailand kept its infection numbers low in 2020 thanks to successful containment measures.

This year, however, it is facing a much bigger challenge. After containing a second wave that started last December, Thailand is struggling to curb a third wave of infections that has pushed daily caseloads and death tolls to unprecedented levels.

Before the start of the latest wave, Thailand had reported 28,863 cases by March 31. In five weeks, that number has more than doubled to surpass 76,000. On Friday alone, it reported 1,911 new cases.

The ongoing outbreak has been traced to a number of nightlife venues in Bangkok. On April 5, the city announced the closure of 196 entertainment venues for two weeks. But the virus kept spreading. It was further exacerbated by mass travel for the Songkran Thai New Year in mid-April, when hundreds of thousands of Thais visited families and beaches. 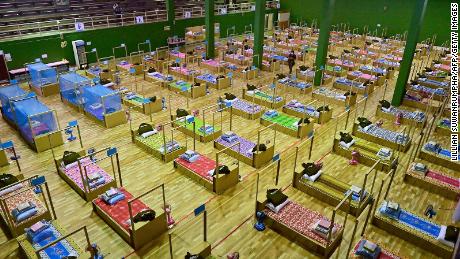 Wayo Assawarungruang, an opposition member of parliament who oversees his party’s public health policy, said some hospitals in Bangkok had denied patients coronavirus tests because they didn’t have enough beds available and were required by the government to immediately admit positive patients.

Authorities have set up field hospitals, using sports centers, conference halls and hotels to accommodate anyone infected with the virus, including asymptomatic cases, to curb the spread in communities.
On Tuesday, the Thai government launched a campaign to vaccinate 50,000 people living in a densely packed district in Bangkok, after more than 300 residents were infected.
The government has been criticized for acting too slowly in rolling out its vaccines. In a country of nearly 70 million people, only two doses have been administered for every 100 people so far.

Cases are also surging in Cambodia, which until February had recorded one of the world’s smallest coronavirus tallies and no fatalities.

But an outbreak that started in late February sent infections skyrocketing from around zero to hundreds per day. Its total caseload has swelled from about 500 in late February to 17,621 now, with 114 related deaths, according to Johns Hopkins University data. On Thursday, it recorded 650 new cases and four deaths.
The surging caseload has put huge strain on the country’s fragile health care system. On April 6, Prime Minister Hun Sen ordered coronavirus patients with mild symptoms to be treated at home, as hospitals were nearing their capacity. 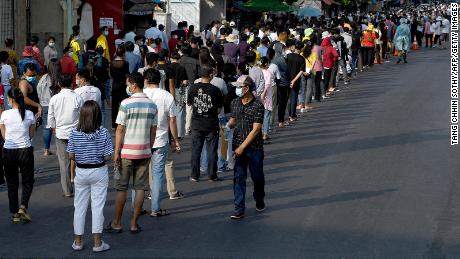 On April 11, the WHO warned Cambodia was “on the brink of a national tragedy.”

“Despite our best efforts, we are struggling to control the virus,” said WHO Representative to Cambodia Li Ailan. “Unless we can stop the outbreak, Cambodia’s health system is at high risk of being overwhelmed, which would have disastrous consequences.”

Li also warned the ongoing outbreak is different from last year due to the contagious UK variant, which has been detected in Cambodia.

To curb the spread of the virus, authorities imposed a lockdown in the capital Phnom Penh and a satellite district on April 15. The restrictions came in the middle of the Cambodian New Year, a three-day national holiday that usually sees large numbers of people return home to celebrate with their families.
Areas labeled as “red zones” — home to about 300,000 people — imposed strict measures that banned residents from leaving their homes except for medical emergencies. Rights groups warned the lockdowns were leading to an emerging humanitarian crisis, with residents struggling to get food and other necessities while NGO groups were barred from entering to distribute aid.

On Monday, Hun Sen ordered the end of the Phnom Penh lockdown, despite surging cases.

The country is pinning its hope on vaccinations to curb its second wave. On May 1, the Cambodian army began a month-long campaign to vaccinate nearly half a million residents in the worst-hit areas of Phnom Penh, with vaccines made by Chinese companies Sinopharm and Sinovac.
So far, more than 2.6 million doses have been administered in the country of 16 million people — but just 6.33% of the population is fully vaccinated.

Earlier this week, Indonesia’s Health Ministry confirmed two patients had the highly infectious coronavirus variant B.1.617, that was first identified in India. The country of 270 million has recorded a daily average of about 5,000 Covid-19 cases in the past week.

Authorities are concerned about the impact of the upcoming Mudik holiday, in which tens of millions of people travel to see their families in their hometowns to celebrate Eid al-Fitr, the end of Ramadan. 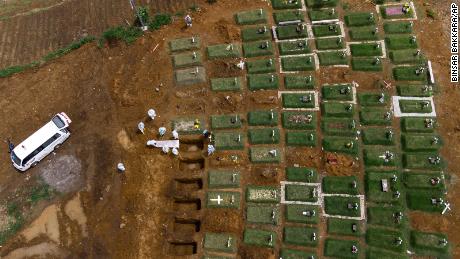 To halt the spread of Covid-19 during Eid festivities, the Indonesian government has banned all domestic travel from May 6 to May 17. The ban covers public and private journeys, including using cars, motorcycles, buses, trains, ferries, ships and planes.

Despite the travel ban, 18 million people — or 7% of Indonesia’s population — were still planning on traveling for Eid al-Fitr, according to state news agency Antara.

About 155,000 personnel including 90,000 police and 11,500 military officers are being deployed to posts around the country to enforce the ban and restrictions around the holidays, Antara reported Wednesday. In Jakarta, more than 4,000 personnel will be stationed around the metropolitan region to enforce rules.