Even as the coronavirus surge in the Bay Area appeared to be leveling off, the United States crossed another grim milestone on Tuesday: 400,000 deaths.

At least 401,120 people in the United States have died of the coronavirus by Tuesday afternoon, Johns Hopkins University reported — representing nearly 1 in 830 Americans. 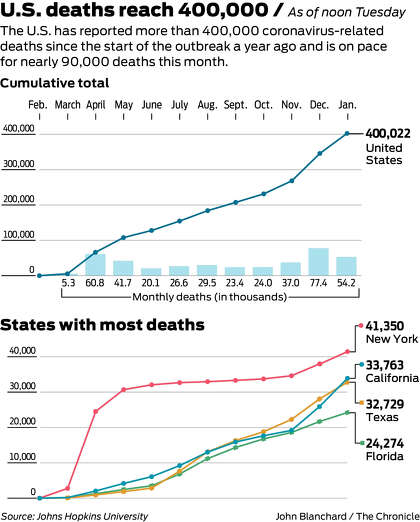 California went from seeing more than 3,500 hospital admissions in the early part of the month to an average of 2,700 per day now, said Dr. Mark Ghaly, secretary of the state’s Health and Human Services department — a “significant reduction,” he said. The rate of virus transmission is also decreasing across the state, as is the rate of new virus cases at nursing homes.

Even though the peak of the surge appears to be past, “there is still a tremendous amount of COVID in our communities,” Ghaly said. The new L452R variant, which has spread quickly in California, remains under study, he said, with the state working with UCSF and Scripps College and the federal government. “We know it was recently identified in several large outbreaks in Santa Clara County,” he said, and officials are “working to determine if this variant has any increase in infectiousness, its impact on vaccinations. … These variants underscore the need to keep our guard up.” … It will certainly impact how we will move forward.”

Vaccines remain another area of significant concern. San Francisco’s vaccine supply — which goes to San Francisco General Hospital and city clinics that serve those who are insured or underinsured — could run dry by Thursday if the city doesn’t receive new shipments, Mayor London Breed said Tuesday.

Private providers have a separate vaccine pipeline, and Breed added that the city’s supply constraint “should not have a significant impact” on plans to open a mass vaccination center soon at City College.

San Francisco’s entire health care system —including both public and private providers — has received 102,825 doses of the vaccine as of Tuesday, Breed said. But those are supposed to count as both first and second doses. There are about 210,000 people in San Francisco eligible for the vaccine under the first tier of California’s distribution system.

Dr. Grant Colfax, the city’s main public health official, said that the city has received 8,000 doses from the Moderna lot that the state recommended not be administered pending further studies, following a spate of allergic reactions from the lot at Petco Park, the Padres’ stadium in San Diego.

“We paused on those out of an abundance of caution,” he said. “We have not received any replacement doses.”

Dr. Sara Cody, Santa Clara County’s public health officer, said that the county received “a little over 21,000” of the Moderna doses under scrutiny, which had been scheduled to be distributed by the county, Stanford Health Care and El Camino Hospital. None have been given.

Ghaly said that a vaccine safety committee was meeting Tuesday to determine if the lot is safe, and “we believe we will come to some resolution soon.”

San Francisco expects to receive another shipment of 1,775 doses this week, health officials said, but each of those have already been claimed — and that compares to 12,000 doses received last week.

San Francisco on Tuesday morning started a website to notify people when it is their turn to get a vaccine. Some reported experiencing glitches and crashes — which the city attributed to a “high volume of visits.” It seemed to be working again by about 1 p.m.

Cody of Santa Clara County said that the supply uncertainties made it “impossible for the county to plan ahead for vaccine distribution.” She added: “It’s likely that future allocations will not distinguish between a first and second dose.”

On a state level, Ghaly said California may have roughly achieved its goal of vaccinating 1 million people in 10 days over the weekend. About 1,525,815 doses had been administered by Tuesday. Friday saw the most vaccines administered in the state in one day at 110,505 doses.

The entire Bay Area remains under a stay-home order. Asked when it might end in San Francisco, Colfax said: “We have some hopeful signs in regard to case rates starting to drop and hospitalizations starting to level off. … If that trend continues I expect we will move out of that state stay-at-home order.”

Monica Gandhi, an infectious disease specialist with UCSF, said the region avoided the worst predictions about high hospitalizations and credited the Bay Area’s relative success compared to the rest of the state to the early implementation of lockdowns and its compliant residents.

But, she warned, that compliance could have an expiration date if officials don’t put an end date to the region’s stringent lockdowns.

California crossed the 3 million case mark on Tuesday — meaning that about 7.6% of Californians have gotten a coronavirus infection since the pandemic started.