Despite guidance from the government and efforts on the part of bar owners to implement safety measures, customers and staff alike failed to stick to even the simplest measures aimed at preventing spread — especially when customers were intoxicated, researchers found.

With some venues back in business for indoor dining in places like New York and Portland, many US business owners are working to make the experience as safe as possible — something the Scottish researchers found may not be so easy.

After a lockdown in the UK, bars in Scotland were allowed to reopen in July under new guidelines, including keeping groups of customers at least one meter, (a little over three feet), apart, keeping all customers seated and requiring staff to wear face coverings.

Niamh Fitzgerald, a professor with the University of Stirling in Scotland, and colleagues visited 29 bars to observe how these safety measures worked in actual practice.

“It was essentially about understanding, what are the risks and how successful are our bars and pubs in controlling those risks?” said Fitzgerald.

The team found that staff did not consistently wear face coverings, with some lowering their masks to speak to customers — perhaps defeating the purpose.

While most facilities were able to restructure their layout to accommodate a one-meter distance between tables, many still had issues with overcrowding.

“It was very difficult for them to completely eliminate what we call ‘pinch points,’ so there were narrow areas in most of the venues, either at the entrances, or in corridors or in toilets, where it was difficult for customers to avoid coming close together,” said Fitzgerald.

One facility covered the bar counter with black and yellow tape and a warning to stay distanced, but patrons still crowded around the counter.

“None of the patrons acknowledged that the tape was there,” the researchers wrote. 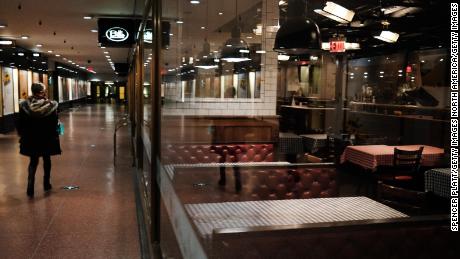 Much of the risk the team observed was in the evenings, when customers were drinking. The researchers note that alcohol consumption can impact a person’s hearing, vision and judgment, making it physically more difficult for them to comply with safety measures. It can also lower inhibitions, resulting in people simply caring less about complying.

The team saw people jumping from table to table, touching each other and singing or shouting.

Some customers made new friends in unexpected places.

“Two women from different groups . . . bumped into each other outside the toilet and started screaming and hugging and jumping about together,” the team wrote. “They then entered the toilets and went into a cubicle together, they were then observed washing their hands for about two seconds when they left, despite signs being everywhere recommending a 20-second hand wash.”

The team described a heavily inebriated woman asking a handsome waiter to take a picture with her. He obliged, after which she kissed him on the cheek and thanked him.

In all but one instance, staff were unable to stop such behavior, Fitzgerald noted. “We found that mostly, they didn’t even try.”

In an industry where the customer is always right, it can be hard for staff to lay down the law when it comes to coronavirus precautions.

In interviews with business owners, many told the researchers that they are used to managing intoxicated people.

“I think that level of intervention is probably — at least in Scotland — when people are very drunk and they’re disorderly,” said Fitzgerald. “Whereas, the kind of level of drunkenness that these sorts of behaviors happen at are at a stage where people are overly friendly; they’re just having fun. It’s not the kinds of situations that staff would have previously had to intervene with.”

“There’s this kind of new expectation of behavior that neither the customers nor the staff have really adjusted to,” she added.

Fitzgerald believes that bars may be able to mitigate some level of risk by communicating clearly about expectations and trying to create an atmosphere of “self-policing” among customers. Though unlike places like grocery stores or retail shops, bars are inherently social spaces, and efforts to make them less so may result in fewer customers.

Governments can help eliminate risk by implementing mitigation measures, like curfews, Fitzgerald noted. After a large outbreak in August linked to more than 20 bars and restaurants in the Scottish city of Aberdeen, the researchers noted that Scotland tightened its guidelines. The country mandated the collection of customer information for contract tracing and banned background music in venues, to prevent people from having to shout or lean in close to hear one another.

Of course, there’s no way to eliminate risk completely.

“It’s really looking at, at this point in time, are transmission rates low enough that we can tolerate this level of risk and be confident that if there is any transmission, that we can track and trace it, and that we can deal with it without it becoming a bigger issue?” said Fitzgerald.

Many business owners know all too well that staying closed during the pandemic can be financially devastating.

“I suppose governments maybe need to think about what support is available for those premises, so they don’t feel obliged to open if they really don’t think that they can operate safely,” she added.